Allergic rhinitis or hay fever is a common health problem for over 40 million Americans. The well-known, and unwelcome, symptoms include sneezing, runny and/or stuffed nose, itchy nose and eyes, and congested sinuses. These unpleasant symptoms are the body’s over-the-top immune response to invading allergens such as plant pollen, fungal spores, house dust, house mites, and animal dander and hair. The body’s response causes mast cells to release histamines, which are the chemicals responsible for the membrane inflammation that causes all the problems.

Allergic rhinitis usually starts as a seasonal reaction to the release of plant allergens, but, for many sufferers, it can eventually become a year-round condition as their immune systems gradually weaken. The standard medical treatment consists of two different strategies. First there is the taking of antihistamine drugs or decongestants to provide temporary relief from symptoms, and then there is the regular use of allergy-suppressant drugs such as corticosteroids to prevent or reduce the severity of attacks. The latter approach would mainly apply to seasonal sufferers.

The main difficulty with both approaches is the unwanted side effects. Antihistamines and decongestants can cause many problems, including drowsiness, fatigue, headaches, anxiety, high blood pressure, heart palpitations, nausea, and insomnia. Corticosteroids have short-term side effects such as weight gain and high blood pressure and serious long-term effects including growth suppression, diabetes, cataracts, and osteoporosis.

Fortunately for hay fever sufferers, there is now an alternative treatment, consisting of completely natural ingredients, that has been proven by clinical testing to be both highly effective and free from deleterious side effects.

Aller-7 is a combination of the following seven herbal extracts: Phyllanthus emblica (fruit), Terminalia chebula (fruit), Terminalia bellerica (fruit), Albizia lebbeck (bark), Zingiber officinale (root), Piper longum (fruit) and Piper nigrum (fruit). The developers spent more than ten years testing various blends of ingredients before settling on the above combination. During that time, numerous trials have been conducted, the results of which prove the efficacy of Aller-7 beyond any doubt.

A recent study, published in the International Journal of Clinical Pharmacology Research (XXIV (2/3):79-94, 2004), showed how useful Aller-7 can be for allergy sufferers. This multi-center study consisted of both open-label and double-blind trials, with similar results found for each. Over 90 percent of the total 545 subjects reported a 40 to 100 percent improvement in their symptoms. Furthermore, complete relief from sneezing, running nose, and nasal congestion in open-label trials was noted in 28, 37, and 45 percent of patients, respectively. Most importantly, no serious side effects were reported.

Another study (Int J Tissue React. 2004; 26(1-2):43-51) involving laboratory mice and rats, demonstrated how Aller-7 achieves its beneficial results. The authors concluded that: “These results demonstrate that this novel polyherbal formulation is a potent anti-inflammatory agent that can ameliorate the symptoms of allergic rhinitis.” Other research published in 2004 (Drugs Exp Clin Res. 2004; 30(3):99-109) showed that Aller-7 is a potent scavenger of free radicals—damaging molecules that, if left unchecked, can damage tissues throughout the body. Apart from anti-inflammatory and antioxidant benefits, the constituents of Aller-7 also provide support in maintaining healthy respiratory and immune systems and in helping to stabilize mast cells, thus limiting the release of symptom-causing histamines.

Aller-7 is a safe and effective supplement that can be used all year round by those who suffer from seasonal or chronic respiratory difficulties. 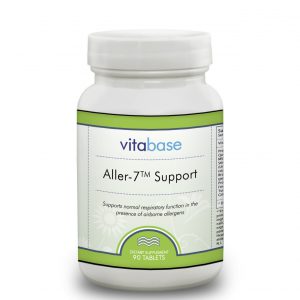 Quick View
Out of stock

Dr. Passero completed four years of post-graduate medical education in Portland, Oregon at one of only four accredited Naturopathic Medical Schools in the country. His Naturopathic training consisted of classroom study equivalent to conventional medical school and included extensive exposure to patients under the guidance of MD’s, Chiropractors, Naturopaths and Acupuncturists. While there, Dr. Passero trained and preceptored with some of the nations leading doctors in the field of natural medicine. (To learn more about an accredited Naturopathic Education, you may visit http://www.naturopathic.org/viewbulletin.php?id=19) Dr. Passero continues his post-graduate training through ongoing participation in continuing education and preceptor-ship with other experts in the field of natural medicine. In addition to private practice, Dr. Passero works with leading manufacturers of natural health products and as a Naturopathic Consultant for businesses interested in bringing natural health to the public in a responsible manner. This work keeps him abreast of the latest medical research regarding natural medicine. In his practice, Dr. Passero focuses on restoring harmony to both the body and mind with a specific emphasis on hormonal regulation and endocrinology. Through education and guidance patients are able to unlock the natural healing power contained within each one of us. He is currently the Vice President of the Maryland Association of Naturopathic Physicians and is an active member of the National Association of Naturopathic Physicians and the Oncology Association of Naturopathic Physicians.