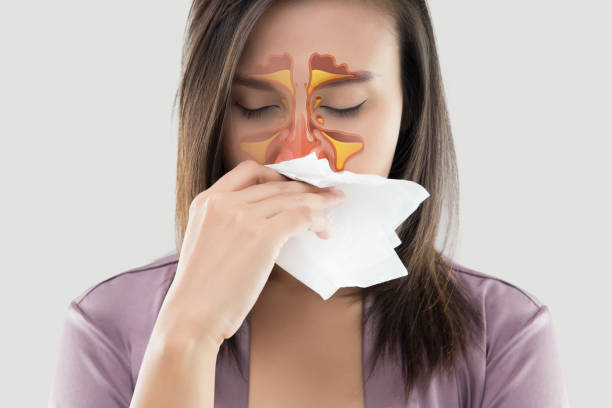 Seasonal allergies are the most common allergic disorder in the United States, affecting an estimated 10-20% of the population. Symptoms are characterized by sneezing, nasal congestion, flu like symptoms, eye irritation, breathing difficulties and other discomfort of the upper respiratory system.

Severe allergy suffers often dread the coming of Spring or Fall because symptoms can be nothing short of debilitating. A study published in the Annals of Allergy and Immunology revealed a significant impairment in verbal learning, decision-making speed, and psychomotor speed in those who suffer from allergies. Traditional over the counter and prescription allergy medications offer some relief but many people who suffer from seasonal allergies continue to suffer even on medications. In addition, the medications used for allergies often come with unpleasant side effects such as sedation, impaired learning/memory, and cardiac arrhythmias.

Natural therapies using both nutrition and supplements can offer allergy suffers tremendous relief without the side effects commonly associated with traditional approaches. Pharmaceuticals: Anti-histamines are the primary treatment strategy for allergy symptoms. First generation anti-histamines can easily cross the blood-brain barrier which is why they are commonly associated with sedation, dizziness, tinnitus, cardiac arrhythmias, incoordination, blurred vision, diplopia, euphoria and tremors.

The second generation anti-histamines do not cross the blood-brain barrier so sedation and fatigue is not a concern. However, these drugs are known to interact and cause serious problems with certain anti-depressants, antibiotics and HIV medications.

Nutrition can be an effective component of a natural program for managing allergy related symptoms. Because allergies are primarily an inflammatory reaction of the immune system, food choices can work to either promote or dampen that inflammatory response. A diet program to combat allergies works to eliminate inflammatory foods. Some common inflammatory foods include refined sugar, hydrogenated fats, and common food allergens such as gluten and dairy products. Sugar is known to increase the activity of inflammatory pathways in the body and many people notice reduced symptoms when it is restricted from the diet. Dairy products are of particular concern because of their ability to increase both the production and thickness of mucus secretions. Excessive mucus secretions are one of the hallmark signs of allergy and eating foods that further promote this process only make the symptoms worse. Food sensitivities and food allergies stimulate the immune system and promote pathways of inflammation. Eating a diet free of the most common allergens like gluten, egg, soy, corn and dairy products can significantly help to reduce immune over activation. While avoiding this many foods may seem difficult for many people, the benefits can be dramatic. Even just avoiding some of these foods can make a huge difference, with the most pronounced results usually occurring on sugar free, dairy free and gluten free diet. Natural Supplements:

Urtica Dioica is a commonly growing plant often used to naturally treat allergy symptoms. The small hairs on the stems and leaves cause irritation and inflammation to the skin when touched. When taken internally during allergy season, most people get significant relief of common allergy symptoms. Remarkably, histamine, the same compound that causes allergy symptoms, is found to be concentrated in the stinging nettle leaves. It would appear contradictory that a plant containing histamine would temper the histamine response when taken orally but research has shown that histamine can act to locally modulate the immune response. Histamine has been used to treat various medical conditions related to allergy including headaches, allergic arthritis, penicillin reaction and hives. A randomized, double blind study using 300mg of freeze dried nettle leaf in the treatment of allergic rhinitis showed promising results. All of the patients who completed the study rated nettle leaf as being more effective than placebo. 58% of the patients rated it as effective in treating their allergy symptoms and 48% found it to be equally or more effective than their previous medicine. Side effects are rare and toxicity is very low. The recommended dose is 300mg/day of a freeze dried preparation. Higher doses can sometimes be more effective depending on the severity of symptoms.

This potent, natural extract from maritime pine bark has been shown in numerous studies to have positive, balancing influences on the immune system. It is a potent anti-oxidant and has been studied for the treatment of heart disease, skin health, asthma and diabetes. When it comes to seasonal allergies, pycnogenol seems to be most effective when started before symptoms hit. In one study, patients taking 50mg of pycnogenol 2x daily significantly reduced their eye and nasal symptoms by 32%. When therapy was started seven weeks prior to the onset of birch allergy season only 12.5% of patients needed any over the counter allergy medications whereas 50% of the placebo group reported the need for non-prescription antihistamines. In addition to hayfever symptoms, pycnogenol has shown promise for the management of asthma. Human studies have shown that people with allergic asthma who supplemented with 100mg of pycnogenol daily reduced night time asthma symptoms by 50% and reduced dependency on inhaled steroids. Another study of 60 children ages 6-18 years with mild to moderate asthma showed that supplementation with pycnogenol significantly reduced dependency of rescue inhalers compared to the placebo.

Related Post: 5 Vitamins and Supplements that Strengthen your Immune System

Derived from the stem of a pineapple plant, bromelain is classified as a proteolytic enzymes. This type of enzyme has the ability to break down protein structures in the body including ones related to inflammation. It has been found to be an effective agent in breaking down mucus secretions in the respiratory system. This ability to thin mucus secretions plays an important role in the relief of common allergy symptoms. Additional benefits for allergy relief are related to bromelain’s ability to reduce localized inflammatory responses. This ability to counteract inflammation helps to prevent localized swelling associated with inflamed sinus passages. The recommended dose for allergic rhinitis is thought to be 400-500mg three times daily of a strength of at least 1800-2000 m.c.u.

Found in a variety of fruits and vegetables, quercetin is classified as a flavonoid. It combats inflammation by stabilizing the membrane of white blood cells and mast cells. All inflammation is mediated by our immune system and a variety of specialized immune cells, starting with white blood cells. Allergies in particularly, are triggered by histamine containing mast cells. When the body comes in contact with an allergen it triggers a cascade of immune events that ultimately results in mast cells releasing histamine which then triggers allergy symptoms. Quercetin’s role in stabilizing mast cell membranes helps to prevent the release of histamine into the blood stream and reduce allergy symptoms. A Japanese study proved this phenomenon. Quercetin significantly inhibited the release of histamine from the mast cells of allergy sufferers. The recommended dose is 300-600mg 3x daily. It is best taken 5-10 minutes before a meal if possible. Some evidence suggests that the beneficial effects of quercetin are enhanced when taken with bromelain so these nutrients are often combined in allergy formulas. Vitamin C has been shown to exert similar cell membrane stabilization on mast cells and is often included in formulas that contain quercetin. Other considerations: Other natural supplements are thought to be helpful in the treatment of seasonal allergies and are often combined with the above recommendations for a comprehensive approach. • N-Acetyl-Cysteine – This sulfur-containing amino acid has the ability to break the disulfide bonds that hold mucus together. Ultimately, this thins mucus secretions, making it easier to drain from the sinuses and less likely to cause congestion and become a breeding ground for bacteria. Studied doses range between 200mg-400mg 2x daily. • Homeopathic remedies- These gentle, yet effective natural remedies can offer significant relief for allergy suffers.

The two primary remedies for allergy season are Allium cepa and histaminum hydrochloricum. Common doses are 3-5 pellets of a 6C or 30C preparation dissolved under the tongue 2-3x daily. Homeopathic remedies are best taken 10 minutes away from food or drink. • Bee Pollen- This high protein super food made by bees is composed of millions of pollen grains collected by bees during foraging. No bees are harmed during collection. By consuming these small amounts of pollen on a regular basis, the immune system gets desensitized to allergens over time. People who are really sensitive should start low and work their way up. Starting before allergy season is also best so the immune system can have time to adjust. Local bee pollen is preferred but most high quality bee pollen products will work. It is best consumed in its granule form instead of as a capsule or powder. There are many other added benefits of bee pollen including its almost perfect amino acid profile, dense nutrient content and energy boosting properties. The Take Home Message: With the right combination of dietary changes and natural supplements, seasonal allergies can often be effectively managed without the use of non-prescription or prescription anti-histamines. Given the general lack of efficacy and significant side effects associated with anti-histamines, an alternative approach to successful allergy treatment with minimal side effects is a valuable option for any allergy suffer.

Dr. Passero completed four years of post-graduate medical education in Portland, Oregon at one of only four accredited Naturopathic Medical Schools in the country. His Naturopathic training consisted of classroom study equivalent to conventional medical school and included extensive exposure to patients under the guidance of MD’s, Chiropractors, Naturopaths and Acupuncturists. While there, Dr. Passero trained and preceptored with some of the nations leading doctors in the field of natural medicine. (To learn more about an accredited Naturopathic Education, you may visit http://www.naturopathic.org/viewbulletin.php?id=19) Dr. Passero continues his post-graduate training through ongoing participation in continuing education and preceptor-ship with other experts in the field of natural medicine. In addition to private practice, Dr. Passero works with leading manufacturers of natural health products and as a Naturopathic Consultant for businesses interested in bringing natural health to the public in a responsible manner. This work keeps him abreast of the latest medical research regarding natural medicine. In his practice, Dr. Passero focuses on restoring harmony to both the body and mind with a specific emphasis on hormonal regulation and endocrinology. Through education and guidance patients are able to unlock the natural healing power contained within each one of us. He is currently the Vice President of the Maryland Association of Naturopathic Physicians and is an active member of the National Association of Naturopathic Physicians and the Oncology Association of Naturopathic Physicians.
PrevPreviousImmune System: How It Works + Best Practices Increasing Immunity
Next7 Simple Health Resolutions to Make for the New YearNext