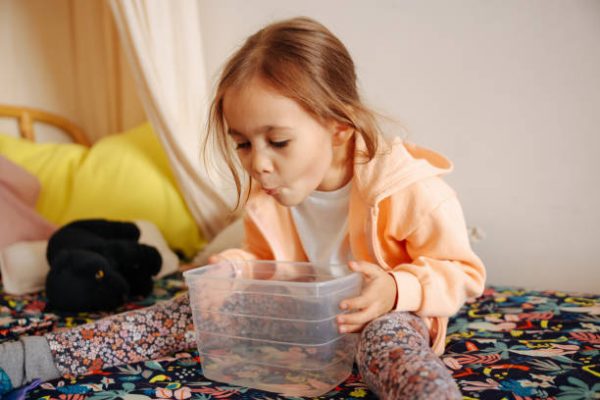 The Most Common Digestive Problems in Children Include:

Colic is a condition that causes infants to cry excessively, often for several hours a day. It is often accompanied by symptoms like fussiness, a swollen abdomen, and clenched fists. While the exact cause of colic is not known, it is thought to be related to digestive issues such as gas or an immature digestive system. Other possible causes include overstimulation, food sensitivities, or an allergic reaction. Colic usually resolves on its own by the time an infant is 3 to 4 months old. In the meantime, there are a few things that can help alleviate symptoms, such as gently rocking or holding the infant, swaddling, or using a pacifier. It is important to speak with a healthcare provider if you are concerned about your infant’s excessive crying.

Constipation is one of the leading causes of abdominal pain. Youngsters may get constipation if they don’t consume enough fiber from fruits and vegetables, which can slow down their digestion and make bowel movements challenging. Although it may be uncomfortable, constipation rarely requires medical attention.

People worry a lot about constipation, but it’s common for children to go without pooping for a few days, according to Wendy Hobson-Rohrer, MD, a pediatrics professor at the University of Utah Health in Salt Lake City. Infrequent bowel movements are typically not an issue as long as the stools are soft and not firm balls and the youngster is not straining.

Kids’ stomachaches can also be brought on by stress and anxiety. The enteric nervous system, commonly referred to as the “second brain,” is found in the stomach and aids in controlling digestive processes. The gut-brain axis, a relationship that allows the brain to affect the gut and vice versa, is another way that it communicates with the central neurological system. For instance, digestion slows down when a scenario is stressful enough to cause a fight-or-flight response. Even less severe stress might still disturb the digestive system and hurt.

Most children occasionally encounter diarrhea when their child suddenly passes loose, watery feces three or more times a day. Usually, diarrhea only lasts a few days, but if it persists for longer, it can cause severe dehydration. It may also be a sign of an illness that is more serious or an infection. If a baby, toddler, or young kid exhibits any of the following symptoms, they should be seen by a doctor:

Bacterial and viral infections, food intolerance, drug reactions, gastrointestinal disorders, or parasites that enter the body through food or water, such as the parasite Cryptosporidium, which is common in public swimming pools, can all result in diarrhea. Cryptosporidium is the main contributor to diarrhea outbreaks connected to water, according to the Centers for Disease Control and Prevention (CDC).

Children may have a reaction to certain foods, such as milk, wheat, or peanuts, which can cause digestive symptoms like vomiting, diarrhea, and abdominal pain.

Food allergies are a common cause of digestive problems in children. Food allergies occur when the body mistakenly identifies certain foods as harmful or dangerous. The immune system then mounts an attack on these foods, causing inflammation and other symptoms (such as swelling, hives, difficulty breathing, vomiting and diarrhea).

The most common foods that cause allergic reactions include:

If your child has digestive issues, it can be frustrating and worrisome. You want to help them feel better, but you don’t want to cause any additional problems. Here are some tips to help you get started.

Look for the Root Cause.

The first step is to figure out what’s causing the problem. Digestive issues can have many different causes: food allergies, food intolerances and sensitivity, infections, parasites or bacteria in the gut, inflammation due to gluten intolerance or celiac disease, and many others. The only way to know which affects your child is by getting tested.

If your child has been diagnosed with celiac disease or gluten intolerance and you’re trying to limit their exposure to gluten, make sure they’re not eating foods with hidden sources of gluten, such as soy sauce or processed meats like hot dogs that may not seem like they contain wheat at first glance (or even second!). Be sure to read the label closely before purchasing any new foods so that you know exactly what ingredients are being added to your diet — especially when it comes to anything containing soy sauce!

If you suspect your child has an underlying bacterial infection that is causing their symptoms, consider giving them probiotics. These supplements contain healthy bacteria that help strengthen the immune system and restore balance in the gut. Probiotics are available over-the-counter at most pharmacies or health food stores. They are easy to administer by placing one capsule in your child’s mouth before bedtime each night until symptoms subside. For best results, consult with your physician before giving your child any type of supplement or medication.